The average temperature ranged between 24c -30c . The annual average rain fall to Kalutara is 3260mm,with bulk of the rain falling during South-west and north east monsoons. The lowest annual rain fall 1600mm reported in the coastal region of the district and highest 4280mm reported towards the inner boarder indicating heterogeneity among division. Heavy rain fall may give rise to floods especially around the basin of the Kalu Ganga. 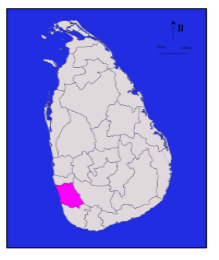 Under the 13 th amendment of the constitution of Sri Lanka ,devolution was carried out vesting most of the powers to the provincial councils.In Western province,the Health Services Statute  No :8 of the year 2000 was  introduced  to  provide  for  the establishment of a Department of Health services and to provide for the proper continuance of the essential for promotion and preservation for health of the of  this province and to provide for all matters connected and incidental there to.

The  Governor  of  a  province  represents the president of the country . Chief Minister who is politically  appointed takes decisions  with  the  board  of  Ministers  in consultation with the governor. Minister of Health the Western province executive officer in the Ministry of Health,holding responsibility to ensure that the provisions of the statute are implemented .In instances where there is no Minister or an Acting Minister ,the secretary may exercise the power of Minister under the statute on the advice of the Governor.